Ryan Brandon first turned to Mantra Learning when he found it difficult to find a foothold in the world of work. He hadn’t previously considered working in logistics but completing pre-apprenticeship training at Mantra Learning opened his eyes to the exciting opportunities available.

Through this, he was able to successfully apply for a Traffic Office apprenticeship at Yearsley Logistics. Ryan impressed his employers with his commitment to learning, so much so that he was nominated for Apprentice of the Year at the Skills for Business Awards 2014!

‘I found out about the opportunity through a friend at the Jobcentre, I’d only been signing on for a week when he told me about it. I didn’t know what a Traffic Office was before I started, I had a vague idea that it would involve working in a quiet office environment but it’s anything but quiet! That’s good from my point of view because I don’t like being bored.’

Ryan also enjoys the variety of the role. ‘I can’t really say what I do day-to-day because it changes so frequently. I can be dealing with drivers, subcontracting with third party hauliers or talking to customers.’

Ryan hadn’t initially considered going into an apprenticeship when he left school but having completed an intermediate apprenticeship and progressed into a higher level, he now sees the value of work based learning.

‘I’d definitely recommend an apprenticeship to other people. You benefit in your role, your employer spends time training you, you’re earning too, rather than just sitting in a classroom for five days a week, like you would be at college (and like most people, wasting that time!). An apprenticeship gives you far more information about the career you’re opting into.’

‘The strength of Mantra Learning is that it’s not just ‘here’s a classroom, here’s a book’, it’s ‘step outside, see our fully-functioning warehouse’ - it’s all operational, it’s all a live working environment. I’m not just talking to a teacher, i’m talking to somebody who’s actively working in the industry, who can demonstrate the skills, not just lecture me about them.’

Ryan has developed a career plan and knows exactly what training and qualifications he needs to get there. After finishing his higher level apprenticeship, he’s planning to achieve his Transport Manager’s qualification and progress within his company.

‘The longer you’re there - because I’ve been at Yearsley’s for almost two years - you just pick up how the transport industry workers. It has it’s own language.’

‘In the frozen goods transport industry, Yearsley are by far the largest. We’re number one in the frozen chain, we service major retailers like Tesco and Asda.

There’s opportunities to grow alongside the company’s growth.’ 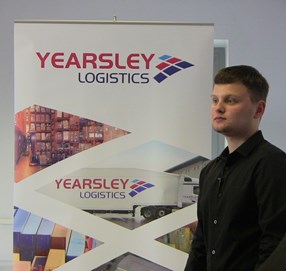